#33 Team HRC leads the way with #7 YART – Yamaha Official Team EWC heading the charge for the EWC regular runners as the third round of the FIM Endurance world Championship, the Suzuka 8 Hours, reaches its halfway mark.

After a build-up week of alternating grey hazy humidity or rain, the skies seemingly cleared ahead of the race with the riders running across the start-finish straight to their bikes under predominantly blue skies with a picturesque clouds providing a contrast.

Whilst it was clean start from the riders and bikes, it was a poor getaway for the #7 Yamaha YZFF-R1, down as low as 22nd with Niccolò Canepa having it all to do, whilst in contrast Gregg Black on the #1 Yoshimura SERT Motul GSX-R1000R had a stormer, up to fourth on track on the first lap. 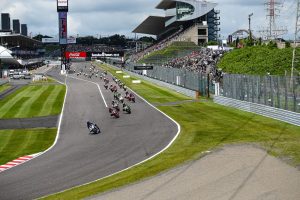 No sooner was the first lap done than the safety car was out for the first time after Kosuke Sakumoto on the #17 Astemo Honda Dream SI Racing CBR1000RR-R took out Naomichi Uramoto on the SDG Honda Racing CBR1000RR-R heading into T13, providing an unlucky race exit for both with their teams’ dreams of glory turning into an instant nightmare.

With both bikes needing recovery and the barriers needing repair it was a 7-lap safety car period, with the Honda NSX followed first by the #33, then the #5 FCC TSR CBR1000RR-R Fireblade with Josh Hook riding the opening stint, from the #10 Kawasaki Racing Team Suzuka 8H ZX-10R with Leon Haslam on start duties, then the SERT, followed by the #37 BMW MOTORRAD WORLD ENDURANCE TEAM M1000RR with Illya Mykhalchyk on board. 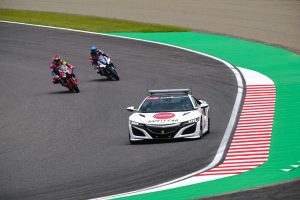 With the safety car back in, it was an early tussle for the lead with Black, Takahashi and Haslam all dicing after the restart before the HRC was back to the place that its pace dictates and started to stretch out a lead.

With the early banter over, strategic considerations soon can into question: who would pit first of the frontrunners? Answer: YART. Canepa had done a fabulous job to redeem his tardy start, up to tenth by lap 10, seventh a lap later, and into third position by lap 14.

By lap 26, the YART was in, with Canepa swapping for Marvin Fritz and so the first stops ensured. The #5 was next, Hook for Di Meglio, then the SERT, Black for Watanabe, but not till lap 28 was the #33 HRC in for Takahashi to swap to Nagashima. 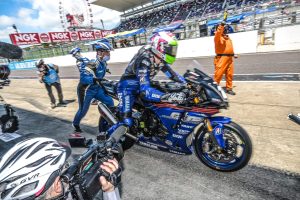 The HRC pitting handed the lead to the #10 Kawasaki for a lap for before it pitted too. Fuel consumption considerations were now there for all to see.

Fuel consumption was not the only consideration for the #11 Webike SRC Kawasaki France team after Randy de Puniet had a low-speed drop at Degner 2, requiring a return to the pits and a 7 minute turnaround before Florian Marino returned to the track. 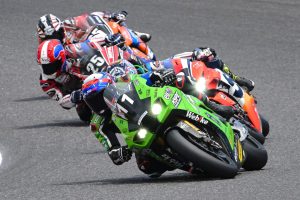 A second safety car came out at the two-hour mark after an off for the #51, whilst the rider was okay the bike was lightly toasted from a fire, but it was as you were at the front. Dramas, however, for the #5 Honda, with a prolonged pit stop to replace a brake master cylinder, dropping the two-rider team right down the order.

Just before half time, more dramas. An overheating issue for the #37 BMW M1000RR meant rider Mykhalchyk was soon overheating too as he had to push back to the pits – no mean feat in the searing heat – whilst Jonathan Rea laid down the ZX-10R whilst navigating traffic coming into the chicane. The Brit was soon back up, and the nearest rival YART soon in for their next rider change, so to positions were swapped, however the BMW was sadly out with a coolant retention issue unable to be resolved. 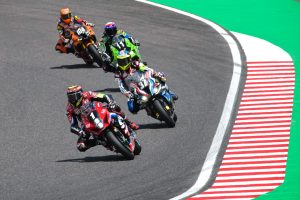 The #33 HRC continues to lead from the #10 Kawasaki entering the second half of the race, with the #1 SERT Suzuki ahead of the #7 YART Yamaha.

Scores on the doors at half time 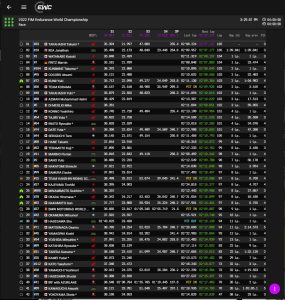